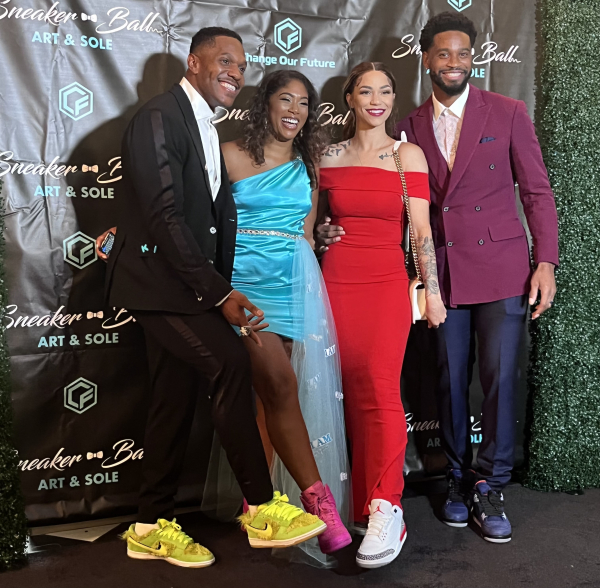 “Change Our Future” Second Annual Sneaker Ball is a Success

Swap heels and dress shoes with Air Force 1s and “snooze-fest” presentations with dancing all night long. It’s what you expected at the second annual “Sneaker Ball: Art and Sole” flagship event hosted by the Change Our Future Foundation on July 7, 2022, at la Vie by Cescaphe.

Change Our Future is a foundation created by former Eagles safety Rodney McLeod alongside his wife, Erika. The foundation focuses on empowering young people in Philadelphia through education, advocacy, and a special focus on becoming leaders and game changers through the power of affirmations.

Guests arrived Thursday night in their finest attire, complimented by their brand new pair of sneakers, to walk the red carpet before heading out to the festivities.

While last year’s first sneaker was also a toy drive, this year’s was a school supply drive.

The event had a little something for everyone. There was a sneaker museum, photo ops and basketball hoops. DJ Diamond Kuts, “Yo! Host of MTV Raps, kept the dance floor electric all night. People had a chance to network with each other and even meet some special guests, like Eagles players Jalen Hurts and Darius Slay, and former Eagles running back Brian Westbrook.

“It means a lot,” Slay said, on what it means to support his teammate and his foundation. “Being together, playing together, being one of my close friends. It’s a great opportunity to come here and support He did it last year, I told him I would do it again, for sure, no doubt, and they always end in a big event.

Eagles offensive tackle Jordan Mailata stepped up and donated a large container of school supplies and cash to keep the Change Our Future mission alive.

As the night went on, Rodney and Erika greeted everyone and thanked those who have contributed to the foundation thus far. Two of the programs that were established with last year’s $203,000 donation are the “I Am” Youth Leadership Summit and Rodney’s “Next Man Up” men’s mentorship program.

“Tonight is just about growing up, tonight is honestly the people in this room that helped us get to this point today,” Rodney said. “Tonight is about celebrating how far we have come in such a short time with the support of everyone in this room, whether they have supported us in the past or are getting to know us now. It feels good when the community is behind your mission and what you stand for,”

The “I Am” Youth Leadership Summit was held on June 28 at Community College of Philadelphia. The event aimed to train leaders in the community. One of the best messages shared by the McLeods was the power of positive affirmations, something Erika wore on her dress for the evening.

“The summit was amazing. We were able to host 40 children for our first inaugural “I Am” Youth Leadership Summit. It was so impactful to see the difference that I asked “Who feels like a leader?” at the start of the summit versus the statements we had them write about themselves at the very end. says Erika.

“We let them be their authentic selves, so encouraging them to use positive affirmations to tell their stories was very, very important to us, so I wear the ‘I am’ affirmations because I think that’s something that if you keep telling yourself if you believe in yourself you can, then you can do it,” Erika said, talking about her equally impactful and gorgeous outfit.

Connor Barwin, Lloyd Freeman, Dr. Safiyya S. Shabazz, MD. and Dr. Mpasi have all received a Game Changer Award, an award given to those who have each made a significant contribution to their communities.

Two Changing Lives Awards, given to people in education for their impact on inspiring young leaders, went to Brittni Jenkins, professor of African-American history at Constitution High School and Sharahn Santana, principal from the Peace and Social Justice Academy at Parkway Northwest High School.

After the awards ceremony, there was the fundraising part of the evening. Change Our Future had set a goal of $150,000 and just like last year, the foundation was able to raise more than that to continue to build on the programs that have been implemented.

Change Our Future will live in Philadelphia, although Rodney is adjusting to the Indianapolis Colts this season. Both he and Erika expressed how important it is to donate not only money, but also time.

“I think the purpose of the evening is to talk now about how we have these programs and the impact they can have with your help. We will continue to build more programs with your help. We want people to be separated. It’s one thing to support our event financially, but it’s another thing to get involved as well. Not only be advocates, but your actions and donate your time. said Rodney.

For more information or where to donate, see the Changing Our Future Foundation website.