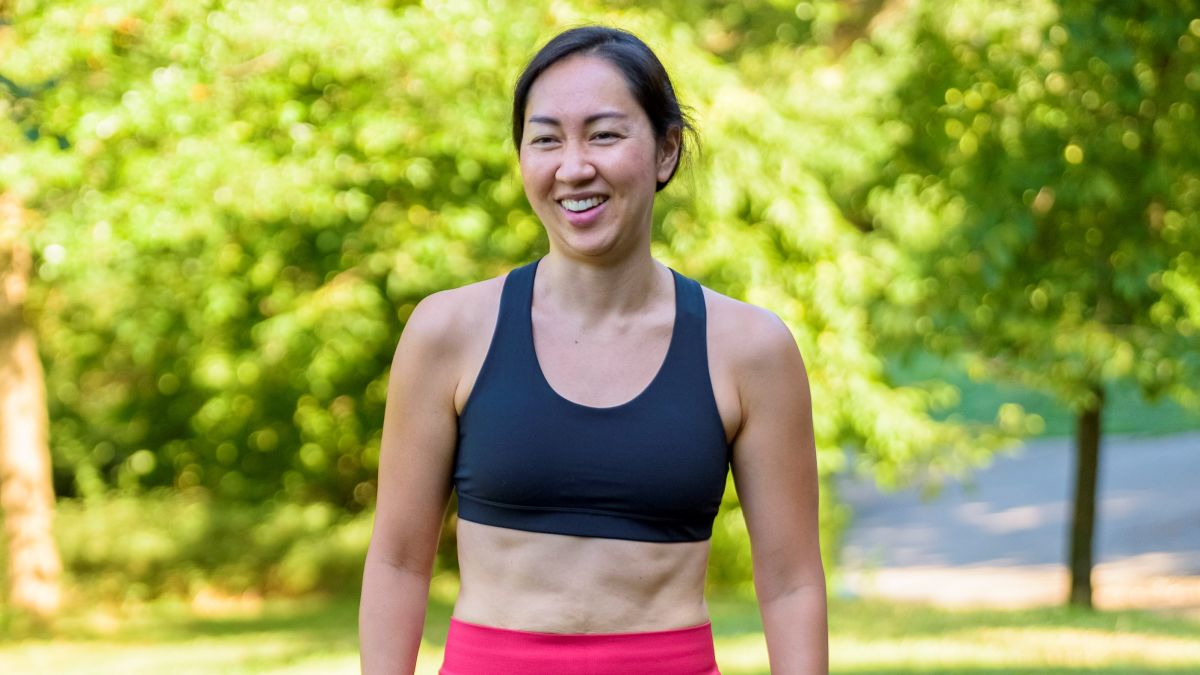 When we sit down to talk two weeks before race day, I apologize to Ayumi Nagano that it’s so early – it’s 8:30 a.m. in North Carolina and 1:30 p.m. for me in London. It does not matter; she laughs – she’s already been up since 4 am. As a mother of two young children, this is the only time she can adapt to her speed training and long runs.

As a child, Ayumi missed sports, as she had to go to Japanese school every Saturday morning. She started running when a friend suggested she join the cross country team (“I didn’t even know what cross country was,” she laughs). And when dark times threatened to beat her down, she used the race as a consolation.

Ayumi is a survivor. She was captain of her high school track team when a trainer made a comment about her weight. As a result, Ayumi struggled with an eating disorder and depression, “It became this obsession of like, okay, if I want to get faster or be faster, I have to lose weight.” She also battled drug addiction, but has been sober for 10 years, and now she is running the New York City Marathon for the first time. Ready to feel inspired? Continue reading.

Ayumi, tell me about those 4 a.m. departures.

I started a local running group because I was trying to find other people to run with early in the morning. just like a woman, it would just be safer. We call ourselves the Highland Creek Race Team and we started in May. We meet every Tuesday morning at 5am. We’re all parents, so we get up at five in the morning and practice. But since my marathon training speed workouts are about two hours long, I wake up at four in the morning on Tuesday and do a two mile warm up, then speed work with the band, then a two mile cool down . Then I’m home at six, shower as fast as I can, and then have to get to work at 6:45. I don’t see it because it’s how many weeks I have left until race day, I’m counting down how many Tuesdays I have to get up at 4am!

How did you start running?

“Throughout my childhood, every Saturday in New York, I went to a Japanese language school. This meant that I could not play sports, because most sports met on Saturdays, and also that I I had double my homework during the week. When I was in seventh grade, I dropped out of Japanese school and was sitting on the school bus when a girl asked me, “Do you want to try for school? ‘cross country team?’ I had no idea what it was but I said yes. The first day I remember we were told to run two miles. It was painful and I remember having trouble going up and down the stairs the next day, but I fell in love with it.

“After that, I ran until college. I loved my track coach in high school, but my cross-country and track coach was just obsessed with winning. He almost treated his runners like a commodity. He wasn’t the nicest person. If you didn’t win for him, it was like he didn’t see the point of you being on the team, and that really left a lasting impression on me. really bitter in the mouth.

I remember my first year of high school was very stressful. I was on the school dance team, played sports, paid out of pocket for my LSAT English and math tutor, worked as a cashier, and tried to keep my school workload under control . During spring training, [my coach] mentioned that I needed to lose weight, and I remember taking that to heart and thinking, “Oh, I’m not going to make championships if I don’t lose weight.” And it became this obsession of like, okay, if I want to get faster or be faster, I have to lose weight. And it ended up sticking with me for almost 10 years.

You’re now a teacher and credit your decision to coach the cross-country team for why you fell in love with running again.

“Yeah absolutely. It’s so hard to run or do any sport in New York. Some of my kids commute an hour on the subway just to get to school. So that means they get up around five or six in the morning, then try to study all day, stay after school to try to do their homework, then they practice for about two hours, before taking the subway for an hour at home house, then start all over again the next day.

The level of dedication they need to stay on the team and want to stay on the team is nothing short of mind-blowing. The fact that these kids love running so much that they are ready to do it inspired me so much. Watching them work so hard every day for months and months and months, I just thought, “This is so beautiful. That’s why you like to run. And that kind of made me fall in love with running again.

“I didn’t tell anyone, but I signed up for my first race in about 13 years. It was the five mile Cocoa Classic in Central Park where you get a cup of cocoa at the finish line. I went there by myself, I didn’t tell anyone, I just went and ran. It was sub-zero temperatures, but I remember having so much fun and feeling so elated.

What does it mean to you to be at the start line of the New York City Marathon?

“It means a lot. It’s only been a few years since I really saw myself as athletic, even though I’ve been running for a very long time. I think it had to do with the fact that I was Asian and I didn’t didn’t really see a lot of Asians in the running world. It’s only been in the last few years that I’ve thought, yes, I’m a runner. Yes, I’m strong. I ran a half marathon in April – it was my first postpartum and post-pandemic, and I remember running around and seeing a sprinkling, maybe four or five young Asian-like girls in the crowd cheering. intentionally looking at them and smiling and waving every time, just to say, yeah, you could direct that too.

It was a nice feeling to exist, and we are here to show you are capable. I think it’s the same with the New York Marathon – yes, there are definitely more Asians than any other running event, but we’re by no means some kind of majority, and I think it’s just important that others see asian faces there too. I think that’s really important. Because I didn’t realize how important representation was until I realized how much it affected me and my perception of myself.

How has your relationship with running evolved over the years?

“After having kids, I’ve become more confident than ever with my running. I don’t know if it’s the hormones – I feel different hormonally, my body is different, my hips are wider and my rib cage is more wide, but I honestly think that’s something else The first time I ran after giving birth after my son in Brooklyn, a man ran past me really fast, and I remember looking at him and having thought, “Oh whatever, my body made a baby. I think that helped me gain a lot of confidence and also a lot of respect for my body.”

“I’m so glad my marathon was postponed – I got pregnant when I was supposed to run it for the first time, then the pandemic happened, then I got pregnant again. Physically I’m more mature in my training, I can push myself harder than before. But also on my easy runs I’m much kinder to myself – I don’t care what people think! I’m like, ‘oh, I’m going to run at a 20-minute pace, who cares? It’s 105 degrees!”

“I’m at my best level of confidence, comfort and satisfaction in my race. I have more confidence in the process. The last few years have really challenged my body physically, in so many ways, and really shown me that it’s capable of really amazing things.