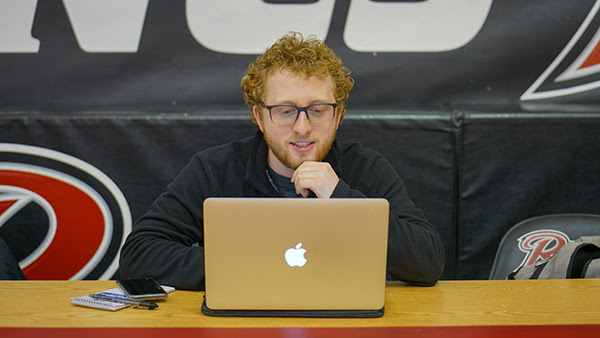 Senior Journalism Specialist Dylan Manfre will travel to Israel this summer to cover the 21st Maccabiah Games as part of the inaugural Maccabi Media program. Manfre was one of 14 students selected nationwide for the program. PHOTO COURTESY ANDREW XON/THE RIDER NEWS/RIDER UNIVERSITY

Senior Journalism Specialist Dylan Manfre will travel to Israel this summer to cover the 21st Maccabiah Games as part of the inaugural Maccabi Media program. Manfre was one of 14 students selected nationwide for the program. PHOTO COURTESY ANDREW XON/THE RIDER NEWS/RIDER UNIVERSITY

Senior Journalism Specialist Dylan Manfre will travel to Israel this summer to cover the 21st Maccabiah Games as part of the inaugural Maccabi Media program.

Manfre, who has served as the sports editor for Rider’s student newspaper, The Rider News, for the past three years, was one of 14 students selected nationally for the program.

The group will receive professional instruction and mentorship from seasoned media professionals while covering the third-largest international multi-sport event in the world, behind only the Olympics and the FIFA World Cup, according to information provided by Rider. .

“The fact that I can represent Rider and be part of this program means everything to me,” Manfre, who will be traveling beyond the United States for the first time when he leaves for Israel, said in the statement. “It will also be a fantastic cultural and religious experience.”

Since its inception in 1932, the Maccabiah has grown to include nearly 10,000 Jewish athletes from more than 75 countries competing in 40 sports. The new program covering the games is chaired by former Philadelphia 76ers broadcaster Marc Zumoff, who recently retired after 27 years as the television voice of the Sixers.

“After extensive research, we now have some of the top aspiring sports media professionals in the country,” Zumoff said in the release. “I anticipate a great learning experience for these young people, while providing unprecedented coverage of the Maccabiah Games this summer in Israel.”

Manfre, a former high school track and field athlete, decided to hang up his running shoes after developing tendonitis in his ankles. He started a blog while still in high school in Metuchen, and his ambition helped cultivate an audience of parents, administrators and others looking for stories not covered elsewhere, according to the release.

Manfre published his first article in The Rider News before he even entered campus. As an incoming freshman, he emailed sportswriter Rob Rose before the semester began fishing for an assignment, according to the release. His preview of the field hockey season would be the first of many articles on Rider Athletics.

“Dylan is an exceptional journalism student who made the most of Rider’s engaged learning opportunities from the moment he arrived,” said Dr. Jackie Incollingo, Associate Professor in the Department of Communication, Journalism and Media and Academic Advisor at The Rider. News, said in the statement. “He is passionate about finding and telling great sports stories and delivering compelling game accounts.”

Last year, Manfre and his former co-sports editor Shaun Chornobroff won the 2020-21 Society of Professional Journalists Region 1 Mark of Excellence for Sports Writing, which includes colleges and universities in the region spanning from Pennsylvania to Maine.

In 2020, Manfre and his former co-sports editor Austin Boland-Ferguson covered the MAAC basketball tournament in Atlantic City, which was ultimately canceled due to the COVID-19 pandemic.

“We were part of the breaking news team that announced the closure of the tournament,” Manfre said in the statement. “It was my biggest goal to cover this tournament. And then the first day we got there, it was cancelled.

Manfre will return to the MAAC tournament in March along with three other Rider student journalists. He also continues to report for The Trentonian, a newspaper that covers local high school and college sports. Manfre turned his internship there into a regular freelance opportunity.

The Maccabi Media program will provide even greater opportunities for growth while gaining new experience spanning international amateur competition, potentially including on-camera reporting and video package production, according to the release.

“The other 13 students come from some of the best journalism schools in the country, and the experience of broadcast professionals is second to none,” Manfre said in the statement. “I am delighted to work with each of them.”