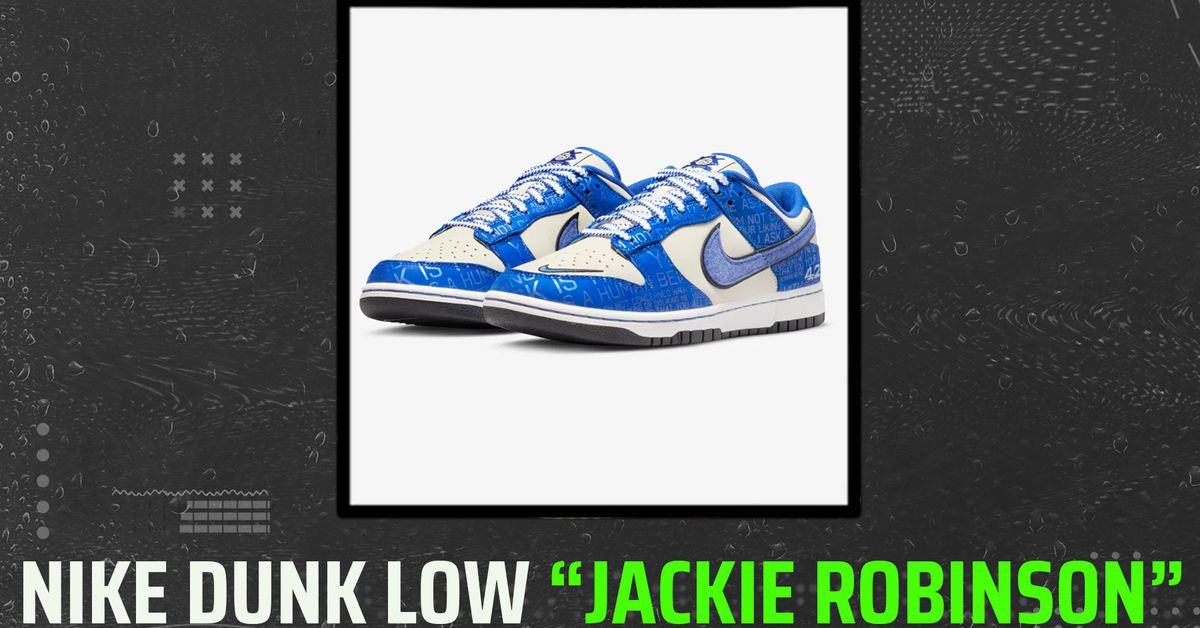 I’ve written about the Nike Dunk several times before, but this is the most poignant and anticipated release of them all. Just in time for the MLB All-Star Game, Nike will drop the Nike Dunk Low “Jackie Robinson” July 19. This shoe was originally supposed to be marked for a Jackie Robinson Day release in April, but it will now be released in conjunction with the Dodgers hosting the Mid-Summer Classic this week.

Robinson, of course, is the great who broke through the MLB color barrier on April 15, 1947, with the then Brooklyn Dodgers. Despite racism from opponents, fans and even some teammates, Robinson would go on to a Hall of Fame career, including winning Rookie of the Year, the 1949 National League MVP award, in addition to be a seven-time All-Star and a member. of the 1955 World Series champion Dodgers. Robinson led the National League in steals twice and batting average once, finishing with a career batting average of .313 with 141 home runs, 761 RBI, 200 steals and 972 points scored in 11 seasons. Robinson was also named to the Major League Baseball All-Century Team in 1999.

Although it might have made more sense to publish them in April as part of the annual report Celebrating Jackie Robinson Day, maybe Nike also wanted to tie Robinson’s story to California. In addition to breaking the MLB color barrier, Robinson grew up in California and was the first athlete in UCLA history to earn college letters in four sports (baseball, basketball, football, and track). Robinson even won the 1940 NCAA championship in the long jump.

The difficulties encountered by Robinson are referenced on this version, with Robinson’s quote “I am not concerned whether you like me or dislike me… All I ask is that you respect me as a human being” printed on the blue Dodger panels on the upper. The shoe features other striking details including a tongue patch celebrating the 75th anniversary of Robinson breaking the color barrier; Robinson’s signature number 42 on the rear heel counter; a distressed/retro style thanks to a specific blue coloring on the Swoosh as well as sail panels on the upper and stitched laces to mimic a baseball.

Beyond the sneaker game, Nike has had a remarkable relationship with Robinson through its partnership with the Jackie Robinson Foundation. Nike notes on its website that the company has invested nearly $3 million over the past five years, including $1 million in fiscal year 2022, to support Jackie Robinson Foundation Scholars, its scholarship program. mentoring and leadership development and its museum.

To see more of this month’s new arrivals, check out our release date calendar.