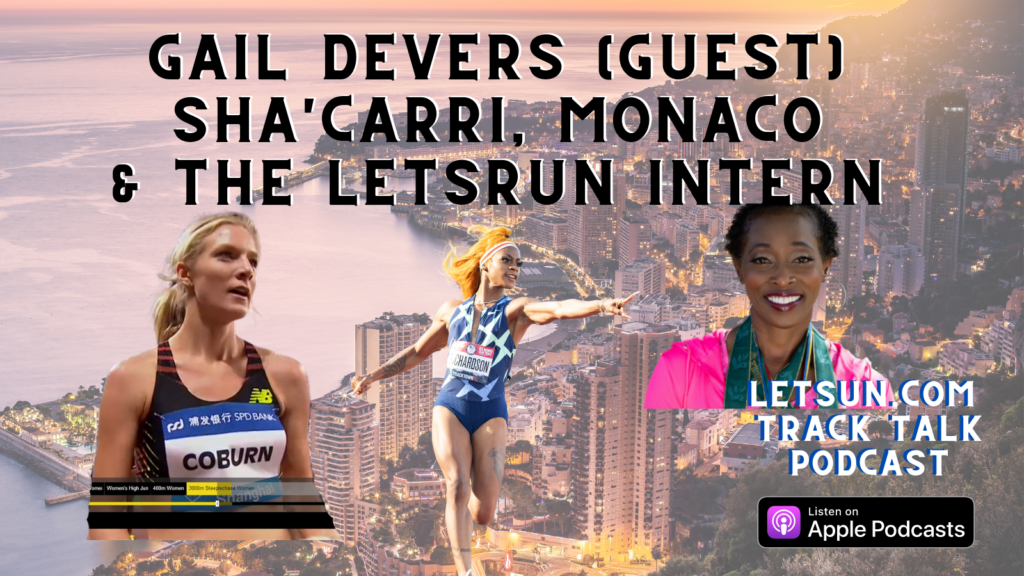 This week’s LetsRun.com Track Talk podcast is here (listen here or in the player below)

Monaco’s mini Olympic preview is here on Friday, but a ton of potential Olympic stars won’t be at the Olympics (Sha’Carri Richardson, Kenenisa Bekele, Christine Mboma, Brianna McNeal). We discuss everything, preview Monaco and ask if Emma Coburn could be the Olympic favorite after Friday and if Sifan Hassan will attempt the Olympic triple. We are joined by the legendary Olympic hero Gail Devers at 86:47 for Gail to talk about her amazing career, her battle with Graves’ disease, doping in sports and, yes, a lot of running (she gives her hot views on Athing Mu, Cole Hocker and Paul Chelimo).

The article continues under the player

You can beat Rojo in the Red Cross Go For the Red Virtual Race on August 7, 2021 GoFortheRed.org for more details. We are joined by James Francavilla, American Red Cross Chesapeake Area Development Director at 84:58 to discuss some of the great things the Red Cross is doing.

Long podcast this week, so we have show ratings for everyone. Usually LetsRun.com Supporters Club Members only get the show ratings. Join the SC today for insider content, one additional podcast per week, daily Olympics podcasts, huge savings on running shoes and more. https://www.letsrun.com/subscribe This is the best running club on the internet. Olympians, US record holders and more are members.

We want your feedback. Email [email protected] or call 1-844-LETSRUN and press option 7 to leave a private voicemail message.

What do the Olsen twins and the Greek fisherman have in common? This it-sandal