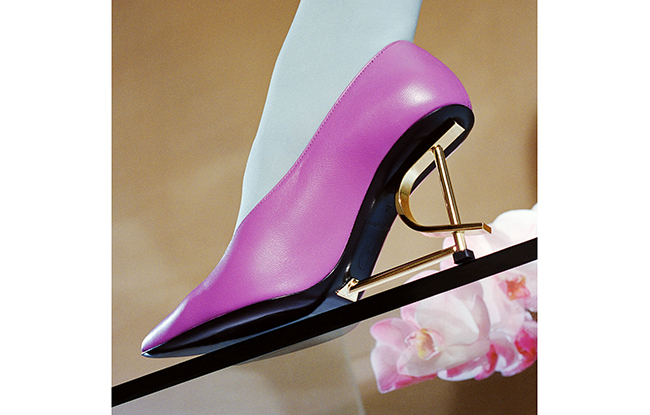 PARIS – Historic French cobbler Charles Jourdan is making a comeback, hiring fashion designer Christelle Kocher as artistic director with the aim of appealing to a new generation of millennial and Gen Z consumers.

The approved shoe specialist Groupe Royer, which bought the brand in 2009, has made several attempts to revive it, the last in 2017 with the opening of a store on Place de la Madeleine in Paris.

But Jourdan has been dormant for two years, giving Kocher a blank slate to introduce his colorful architectural styles in unusual materials. The designer, who is creative director of ready-to-wear brand Koché and feather designer and florist Lemarié, owned by Chanel, said she couldn’t resist the chance to bring the 101 house back to life. years.

“It’s wonderful to wake up a sleeping beauty with incredible history, heritage and legitimacy, and bring it back in a modern, contemporary and creative way,” Kocher told WWD in an exclusive interview. “For someone like me who loves fashion and fashion history, this was obviously an amazing opportunity.”

To mark her new gig, she’s designed a separate capsule collection that will be unveiled at Koché’s show on March 1 as part of Paris Fashion Week.

Known for its Louis XV heel and its historic collaboration with Christian Dior, Jourdan had its heyday in the 70s and 80s, immortalized by the colorful advertising campaigns of French photographer Guy Bourdin. This period coincided with the launch of its accessories business, which remains popular in the vintage market.

In the 2000s, the brand hired Patrick Cox and then Josephus Thimister as creative directors.

Kocher revived a graphic ’70s logo, which appears on everything from heels to buckles, as well as the packaging of the shoes. She paired materials like orange bouclé wool, a painterly multicolored jacquard and lilac satin embossed to resemble ostrich leather, with metallic heels inspired by minimalist artist Donald Judd and architect Eileen Gray.

“It was a real technical feat to make all these heels. They are like small sculptures. I wanted them to look great on the foot, but also to look good as objects,” she explained, adding that most heels hover around a wearable 1.5 inches.

Although the historic Jourdan factory in the former shoe-making center of Romans-sur-Isère has been closed, Kocher has drawn on the brand’s rich archives, including a curved mid-heel named Christelle that she used on a sock slipper. The shoes were made in Italy.

After closing its existing store last year, Jourdan plans to open a more suitable location in Paris in the coming months. Kocher’s first fall collection is set to hit stores in June, backed by a campaign photographed by Camille Vivier, and the brand is hosting shopping dates during Paris Fashion Week.

Selling prices range from 470 euros for a pair of Guy Guy flat slippers with a silver logo buckle, named after Bourdin, to 750 euros for Filicudi multi-strap heeled sandals. A line of leather goods is also in preparation.

“For people who work in the sector, Charles Jourdan is a major reference,” Kocher said.

“There is a history and a real legitimacy, but I didn’t want to focus on the past, but rather project it into the future. There is a certain classicism and timelessness in the lines, but at the same time, audacity and impertinence in the choice of materials and colors. I wanted the brand to be bright, upbeat and geared towards new customers,” she added.

Monsieur L. is making genderless shoes for a new generation

Von Dutch partners with Koché for a premium capsule