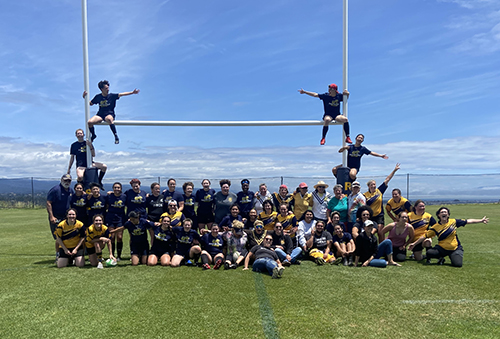 For the first time since 2007, UC Santa Cruz Women’s Rugby Football Club finished their season in second place in the Western Pacific Championship Game. Their 2022 season came full circle, winning against the Santa Clara University team – who had beaten the Banana Slugs in their first game – in the first round of the playoffs.

Reflecting on the team’s season, Diana Ochoa, President of UCSC Women’s Rugby Football Club (Oakes ’23, Environmental Science) said the 30-member team has worked tirelessly to have a successful competitive season after a year and a half of learning remotely.

“We’ve really come a long way, and seeing the team take second place and make the playoffs was such a cool experience,” Ochoa said. “It was great to give this success to the coaches too, because they have worked so hard for this for several years. It has been such an amazing season, and we are so much more excited for next year.

Ochoa is in her second year at UCSC and plans to graduate in 2023 with a bachelor’s degree in environmental science. She was one of two members to join the club in the 2020-2021 academic year and is now president of the club. In her role, Ochoa communicates frequently with UCSC’s athletic and recreation department and prepares the team for game days.

In September, Ochoa tore her ACL and she hasn’t been able to take to the pitch this year, but she is grateful to be club president off the pitch. She said the UC Santa Cruz rugby team is her family.

“From the second I walked into my first practice, I knew these girls were my family,” she said. “The coaches have really helped make it feel like we’re all one family and we’re here to help each other. We are here to play rugby first and foremost, but also finding this community through rugby has been amazing.

Similar sentiments to Ochoa’s are shared by generations of UCSC rugby alumni. UCSC rugby alumni are known as the Black and Gold Society – representing the color of players’ uniforms – and they actively support the UCSC men’s and women’s rugby clubs. Alumni contribute to a rich 55-year rugby history at UCSC, and players often remain close friends for years after graduation.

Deborah Newburn (Cowell ’81, environmental studies and American studies) was part of UCSC’s original Women’s Rugby Football Club and is joining a trip to the Grand Canyon this summer with a handful of her former teammates. She said they often plan trips together and sometimes go on day hikes and cook breakfast and dinner together.

“What’s interesting is that these people weren’t in my major, and yet they are the friends that remain from my days at UC Santa Cruz,” Newburn said. “They’re the only people I see from my college years — not my college roommates, not my dorm mates, and not my co-workers from my major.”

Women’s rugby was in its infancy in the early 1970s, and by 1979 teams had begun to appear in the Bay Area, including UC Berkeley and Stanford, as well as community teams in San Jose and San Francisco.

The UCSC Women’s Rugby Football Club began in 1979 with around six members, men’s team shirts and little financial support. Male coach Dan Porter oscillated between the two groups, and often the women were left without a coach. Either way, the women on the team did everything to make their season go. They raised money for food and transportation and used their own cars for away games.

Martha Brown, the first-ever captain of the UCSC Women’s Rugby Club (Kresge ’81, Biology and Sociology) said the men’s team gave huge support to the women’s team in their debut.

“It wasn’t like we were starting from scratch,” she said. “There was a long history of college rugby at that time, as the men’s team had been around for about 12 years. So we were building on something that they had already created, but taking it in a different direction.”

The women’s team didn’t win a single game in year one, but by year two the women’s rugby club fielded a full squad of 15 players, and by year three they even had a few extra players. The UCSC women’s rugby club was rapidly increasing their position in their league and had a lot of fun doing it.

“We all keep in touch, hang out and take trips together, and it really shows what a powerful activity rugby was for us,” Brown said. “It’s kind of a bonding experience when you go out and rely on each other to make it happen instead of relying on a coach or an administrator or the support of the university. It made those bonds even stronger.

The years 2006-2013 were the most successful competitive seasons to date in the history of women’s rugby at UCSC. From winning the national title in 2006, to winning silver in the country at the Division II Women’s National Rugby Championship in 2007, to qualify for the last four in 2010 and the elite eight in 2013, women’s rugby has quickly become a powerhouse and one of the most competitive sports at UC Santa Cruz. But the teams that have found new success haven’t lost the camaraderie and inclusiveness that was entwined with the history of the sport at UCSC.

“Winning wasn’t everything for us, but we had high expectations of ourselves,” said 2006 UCSC Women’s Rugby Football Club captain Michelle Sit. (Oakes ’08, women’s studies). “I think as players we had a lot of trust in each other.”

Similar to the first women’s team in 1979, Sit said the 2006 team found themselves bound not just by the rigor of participating in a tackle sport, but by doing everything in their power to make the season occur. The team frequently raised funds to attend games across the country and state, and sold calendars to travel to their national championship game.

The 2006 women’s team was the first to win the DII Collegiate 15 National Championship for UCSC Rugby Football Club.

But the 2006 domestic season wouldn’t have been possible without the team’s humble origins, Sit said. In 2004, Sit’s first year, the band was left without a coach. Instead, they were taught by their captains, using shoes as cones and a water bottle as a ball.

“We had to build from scratch, and I think there’s something to be said for that,” Sit said.

Coming out of the COVID-19 pandemic, the 2022 Women’s Rugby Team found itself in a year of rebuilding parallel to UCSC’s rugby history. With the support of their coaches, trust in each other, and a horde of dedicated alumni, the 2022 squad strived to secure their second place finish.

“They’re such an amazing team,” said Rugby 2022 chairman Diana Ochoa. “I want to emphasize how hard it really is for your body to play rugby, and having these 30 girls come out to play means the world to me.”