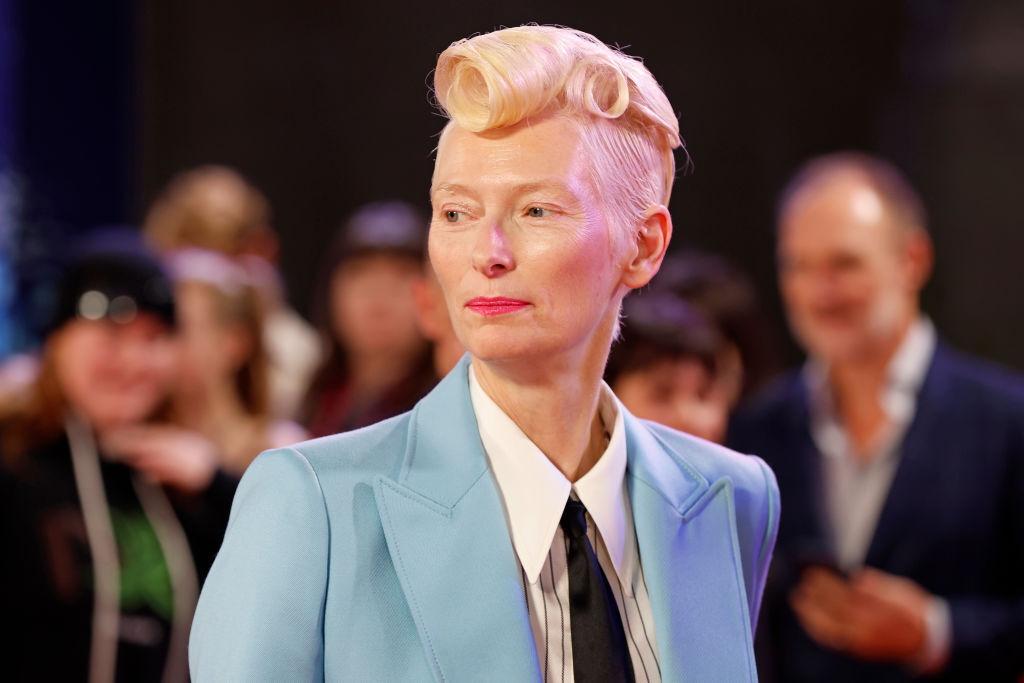 Tilda Swinton attended the premiere of ‘The Eternal Daughter’ at the 66th BFI London Film Festival at the Royal Festival Hall yesterday. The British actress took to the stage styling retro glamor in a modern way.

Swinton wore a sky blue blazer over a white striped button-up shirt and a long black tie. She paired the jacket with matching loose pleated pants. Swinton’s hair followed the retro feel of her outfit in a 50s-style rockabilly hairstyle with victory rolls on top.

She continued the pale blue tone down to her shoes. Swinton donned velvet stilettos for an extra touch of elegance. The sky blue pumps featured a 6 inch heel and a pointed toe. The actress wore no accessories to keep the pastel power suit in focus.

The actress has always stayed true to her unique sense of fashion. Swinton has been Chanel’s ambassador since 2013. She wore a powder blue and white power suit from the designer’s spring 2022 collection to present her new film at the Venice Film Festival.

Swinton arrived on the red carpet to launch her latest film, “The Eternal Daughter,” which premieres Sept. 6. The actress plays Julie in the mystery drama directed and written by acclaimed filmmaker Joanna Hogg. The ghost story follows a middle-aged mother and her elderly mother as they uncover their long-kept secrets when they return to their old family home.

The British Film Institute’s London Film Festival begins October 5th and runs until the 16th with over 300 films and documentaries screened in ten cities across the UK. The Oscar-winning actress is a member of the BFI and president of the jury for this year’s festival. In the first two days, there have already been plenty of sights to see, including Rebel Wilson, Lily James and Jodie Turner-Smith.

PHOTOS: A look at the glitzy and glamorous costumes of 1940s “Hollywood”