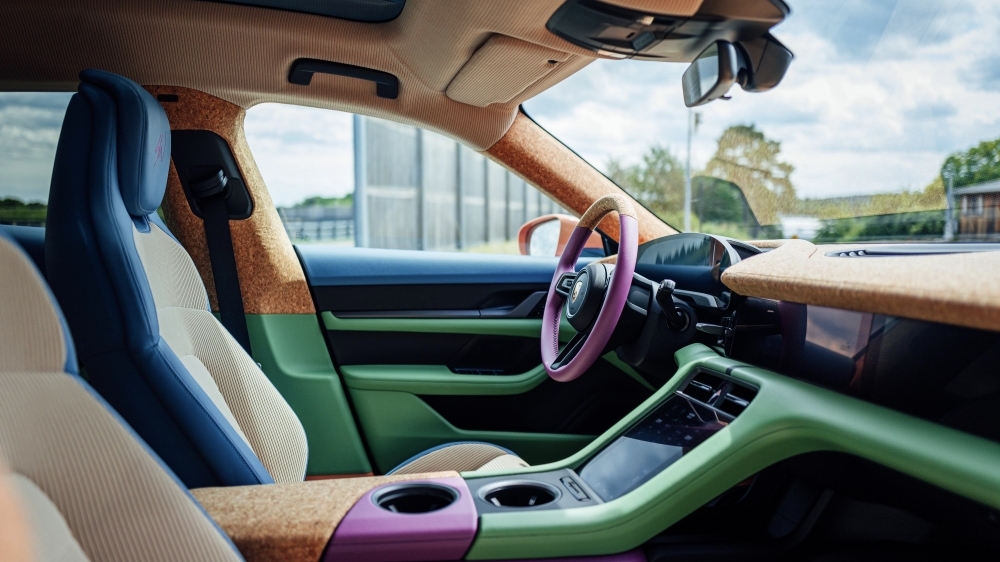 Designer and influencer Sean Wotherspoon is fashionable streetwear with a vibrant color palette and unusual materials. The 32-year-old has teamed up with Porsche to design his own Taycan 4 Cross Turismo.

Wotherspoon first rose to prominence with the Nike Air Max 97/1 sneaker he created in 2018. Besides the design, what was unusual was the use of corduroy as an upper material, and it became Wotherspoon’s trademark. He has worked with Adidas since 2020. In 2013, he opened the first Round Two Store in the United States, a vintage streetwear and sneaker boutique. The designer and influencer previously worked with Porsche on “The Art of Drive”, an interactive online mentorship program that invites personalities to share how they achieved their dreams and inspired others along the way via a series of short films, articles, interviews. , and digital events.

Porsche recently unveiled the art car interior for the first time: the vivid color blocking continues with Nash Blue, Sean Peach, Loretta Purple and Ashley Green. Cork on the dashboard, steering wheel and center console creates visual contrast, while corduroy adds another distinctive feature. The headlining, seat centers and sun visors are covered with the same material in Atacama Beige. The convinced vegan also wanted the interior to be leather-free, an option that other Taycan customers can also choose from.

Get the latest news

delivered to your inbox

“Creativity thrives on interaction,” said Michael Mauer, Head of Styling at Porsche. “As a designer, it’s important to question everything and always aspire to see ideas in a new light. Working with young designers like Sean helps us find new impulses in very different product areas.”

“When I look at something, I examine how I can change it and elevate it to a new level,” says Wotherspoon. “These questions are my personal challenge. It doesn’t matter whether I’m working on a sneaker or car design, a workflow, sustainability topics or a new material. The search for innovation motivates me and I was fascinated from Starting with the unusual materials that the Porsche designers in Weissach work with, we were repeatedly inspired throughout the project and ultimately created a completely new kind of vehicle design.

The partnership was initiated by a marketing communications team from Porsche. Communications experts brought Wotherspoon together with designers at Style Porsche and worked with him to stage the car’s world premiere on Instagram. Wotherspoon visited the Porsche Design Studio in Weissach several times. He also oversaw the physical creation of his art car on location, spending time in the concept car workshop and trim shop in Weissach.

Initially, virtual reality technology was used to try out and discuss many exterior color options on a car model. “Inspired by a visit to the Porsche Museum, Sean came up with the idea of ​​circular elements on the doors,” recalls Volker Müller, Color and Trim Manager at Style Porsche. “His idea echoes the roundels of the starting numbers of historic racing cars. At the same time, this inverted color breaks up the large surface.”

To ensure that the colors were precisely what he wanted, Wotherspoon sent the corresponding Pantone reference codes to Porsche. The mixing bench in the workshop’s paint shop for the concept cars was used to recreate them and the colors were then applied to what are called “paint frogs” so the sneakerhead could see them in person and professionally evaluate them under a range of different conditions. The lighting cabin in the Porsche Design Studio can switch between daylight and artificial light at the push of a button.

The unusual names of the paintings have a personal origin. “After explaining the importance of having unique names, Sean named the paintings after his family members,” explains Volker Müller. This is how Nash Blue, Sean Peach, Loretta Purple and Ashley Green were born.

The idea is for the interior to continue the color blocking concept of the exterior. Corduroy and cork, which he also uses for his streetwear, were the materials Wotherspoon sought out. Corduroy has a long tradition at the sports car manufacturer, with the soft, ribbed material adorning the seat centers of the Porsche 356 as early as 1952. In the new art car, this woven material was added in Atacama Beige , which Porsche used in the 911 Targa 4S Heritage Edition in 2020. “Working with cork, however, presented a number of challenges to our trimmers,” says Müller. In the end, the laminated material, which comes in the form of rolls, had to be adapted to complex shapes such as the dashboard.

The Taycan 4 Cross Turismo designed by Wotherspoon is completed with elements from Porsche Exclusive Manufaktur. These include the 21-inch Cross Turismo Design wheels and the rear wiper cover – both painted in black (high-gloss finish) – as well as the light strip with Porsche lettering in black. Customers can implement comparable projects under the Sonderwunsch program of Porsche Exclusive Manufaktur, a reinterpretation of the legendary service of the same name from the late 1970s, launched in 2021. An example is the use of the Paint option to Sample Plus to allow for Wotherspoon’s four exterior colors. color blocking exterior to be offered in the future.

As a versatile electric sports car, the Taycan Cross Turismo has all the strengths of the Taycan, such as more power and an impressive range, plus more space for rear passengers and maximum trunk capacity. luggage with more than 1,200 places. liters. The standard all-wheel-drive chassis, with its air suspension, has height adjustment. Off-road design cues include wheel arch covers, distinctive front and rear lower sections and side skirts.